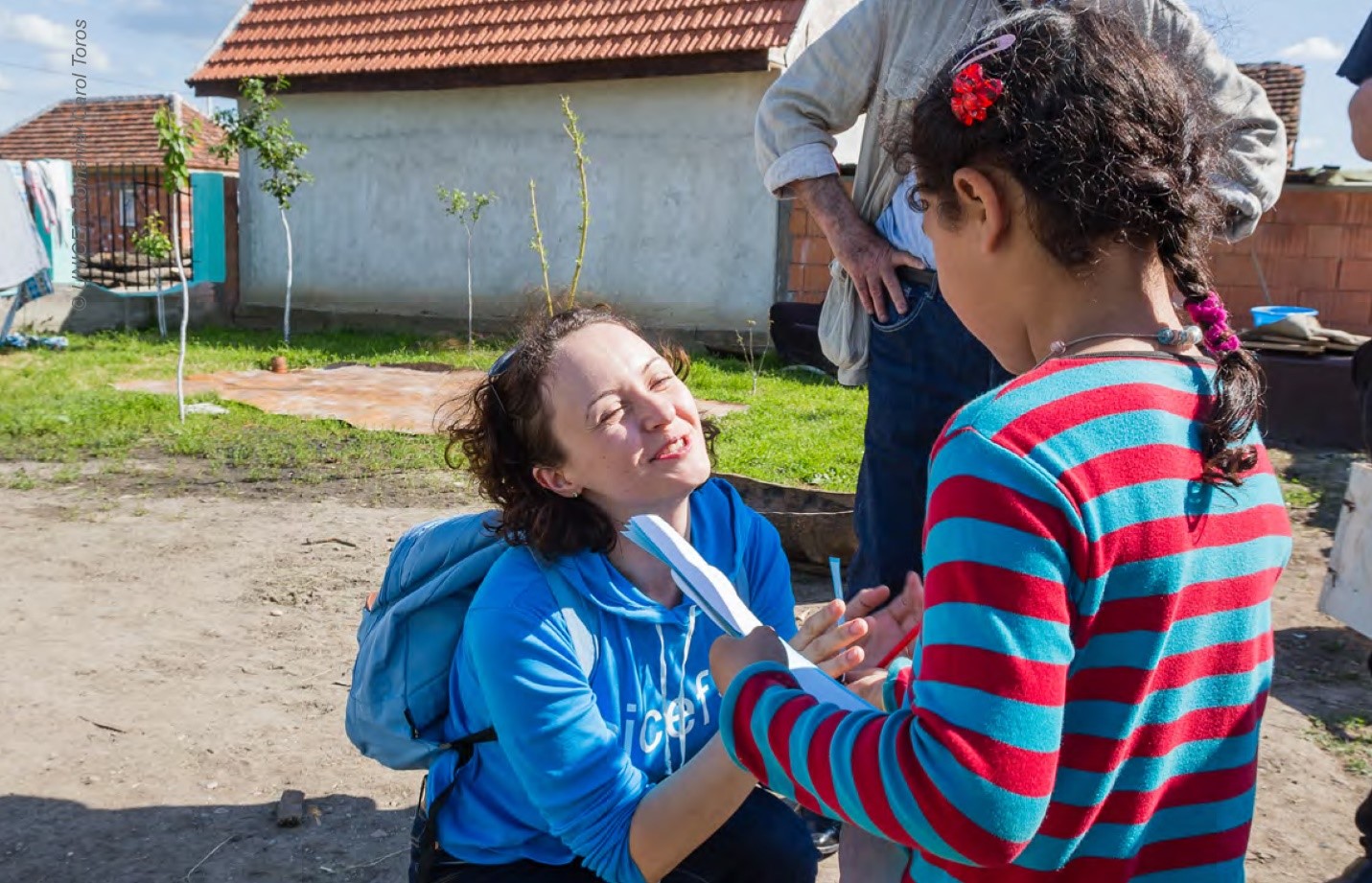 Submitted by florin.opriscan on July 7, 2021

Romgaz’s involvement in projects or interest programs for community progress is motivated by the desire to meet the society’s expectations and to support the multilateral initiatives which can contribute to the sustainable development for the benefit of present and future generations.

The social involvement engagement, integrant of Romgaz CSR Strategy, promotes the active dialogue and cooperation with the stakeholders, to stress a commun purpose in favour of sustainability.

With an implementation period up to the end of 2017, this pilot project initiated by UNICEF in the county of Bacau, meets the multiple needs of communities exposed at the risk of social exclusion due to low access to health, social and educational services, and poor knowledge of one’s rights and opportunities.

The project aims to develop a mechanism for the early identification of children and families at risk and for preventing risk situations through integrated interventions and developing work methodologies in the educational system, social protection and community health care systems.

During 2016, all children and their families from 45 communities were evaluated and, according to the identified needs, they were provided with a set of basic social, health and educational services, delivered by local community teams, respectively: social assistant, community nurse, school and health mediator. Community centers have been established and the community teams have developed medical and social activities for nearly 2000 children and 941 adults. Initial results were obtained based on extended partnerships that have brought together ministries, relevant institutions, 45 schools and 38 local authorities across Bacau county. Photographs and testimonies of these actions can be found on the project website and on the Facebook page of Community Services for Children.

To ensure the sustainability of interventions at local level, 37 community supporting groups have been reactivated, that bring together key representatives from the community and the municipalities included in the project. Nationally, advocacy efforts have resulted recently, in October 2016, with the Government adoption of a law on community assistance.

Romgaz employees gave a positive answer to the initiative to form a group of Romgaz volunteers to present the company during different actions dedicated to the local community and to respond to the programs which meet the expectations of a healthy community and a clean environment.

The volunteering actions are the answer to the community’s need to sensitize the public opinion regarding the impact of climatic changes and the need to engage in environmental actions. For the 3nd consecutive year, Romgaz turned out ambient lighting for one hour at its administrative headquarters and invited the community to attend voluntary activities, an opportunity to draw attention to the problems caused by climate change and excessive direct impact on nature.

Earth Hour was marked in 2017, as in 2016, by organizing in partnership with Dianthus Association Medias, one hour bicycle tour, to promote cycling as a clean alternative to travel into town.

On March 28, 2015, Romgaz organized at Casa Gazelor Naturale Medias a guitar concert by candlelight, sustained by a group of pupils from “Hermann Oberth” School, Medias. Another event where Romgaz volunteers participated in was running at night in Binder Bubi area, Medias, initiative developed in collaboration with Dianthus Association.

Volunteering for hygienisation of natural areas around Medias!

S.N.G.N. Romgaz S.A. joined the largest project of social involvement “Let’s do it Romania”, undertaken in all the Romanian counties and launched the invitation to the company’s employees to be a volunteer for one day in a project which contributes to pollution prevention and reduction around Medias. On September 24, 2016, the volunteers have promoted respect for nature and education for maintaining a clean and healthy environment. Romgaz supported this project by helping the organizers with materials necessary for waste collection. Supporting a national hygienisation project of natural areas is a gesture of assumed responsibility for the environment.

Crayons, a gift for the 1st of June!

Romgaz joined a project that came in support of approx. 50 children living in difficult situations and poverty from Singeorgiu Mures, with a high risk of dropping out school. The Caritas Foundation supports the running of a Day Center for Integration/Social Reintegration of children and families from Singeorgiu Mures, periodically organizing meetings for parental education and hosting tutoring activities and personality development activities for children through programs: School after school or Summer Kindergarten. To support the activities of the Day Center, in May 2016, educational materials for primary school students were collected from personal donations made by SNGN Romgaz SA employees: crayons, pencils, wax chalk, water colours, tempera, plasticine, colored paper, colouring books, educational books and toys etc.

The dropout prevention means reducing the negative effects on social development and economic growth, because dropout is not an individual problem, but one of the whole society, reason why Romgaz is involved in projects or in programs for community progress.

On April 2015, Romgaz, a promoter of an open and responsible relationship towards its employees, meet the proposal of CSR Team to organize, within the company, a workshop dedicated to industry area, for the company’s photography enthusiasts. The photo session developed during 3 days and it combined elements of photographic theory with practical photo sessions at Romgaz locations. The photo workshop reunited 11 volunteers. The project intended to increase and update the photo data base of the company and to promote a healthy and open culture of the organization.

Initiative for sustaining the persons with special needs

On the occasion of Easter, Romgaz hosted, at its headquarters, an exhibition of the Romanian Association for Mentally Handicapped Persons, Medias Subsidiary (Asociatia Romana pentru persoane cu handicap mental, Filiala Medias), under the title “Ofering gifts on holidays” (Dar din dar de sarbatori). By purchasing the exhibits, Romgaz employees voluntarily contributed to the support of the association’s members with special needs.

Romgaz employees support the social responsibility initiative to offer pupils and students the opportunity to broaden their horizon by contributing to forming reading and learning skills. In this respect, books donated by the company’s employees were gathered with the purpose of offering children eager to learn more available reading materials.

“Give away one book, create a library”.

In the first half of 2014, Romgaz joined the civic initiative to create a library for children attending „Sf. Andrei” Day-Center in Medias, where children and needy families benefit from social assistance (education, cultural and recreational activities).

From personal donations made by Romgaz employees approximately 200 books recommended for the age of 6 to 14 were collected for the purpose of developing the appetite for reading in children attending this day-care center.

More than 800 books originating from personal libraries were donated by Romgaz employees to the Secondary School ”Stephan Ludwig Roth” in Nemsa village, thereby setting-up a school library.
In March 2013, Romgaz carried out a campaign for collecting books for the benefit of the 120 pupils of the Secondary School. This project was highly successful. The books were transported and given to the secondary school’s representatives and the children dedicated drawings and messages to Romgaz volunteers.

Casa Gazelor Naturale marks in an exceptional museum area, the natural gas exploration and exploitation history in Romania, of over 100 years old, conserving the identity of the national sector of natural gas in representative exposals, exclusively dedicated to this field.

In collaboration with the representatives of local authorities, organizations and education institutions, Romgaz hosts inside Casa Gazelor Naturale Romgaz, Medias, a series of events dedicated to the community, such as book launching, painting and plastic arts exhibitions, symposions, communication sessions or development of other events dedicated to certain national and international celebrations.

The numerous events hosted and developed during 2015 in partnership with Romgaz are presented on the Facebook of Casa Gazelor Naturale Medias.

Safety on the Internet

At Casa Gazelor, within the social responsibility project “Safety on the Internet”, young users of the internet, pupils attending schools in Medias, were invited to take part in interactive sessions on the risks to which they are exposed in the virtual world. A brief notice on the trueness of the actions on the internet and the modality in which they can protect against the cybernetic attacks, recommendations for the correct accessibility of the information on the internet and rules for the safe use of the internet, completed the sessions developed within the project.

The event dedicated to the International Day of Geology, generically called "Earth Riches", hosted over 100 students from Mediensis Technological College who watched an exposition dedicated to geology, coordinated by Dorin Dordea PhD Geologist.