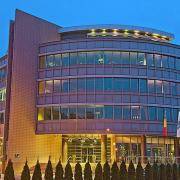 Romgaz is the largest natural gas producer and the main supplier in Romania.

It is a joint stock company whose majority shareholder is the Romanian State owning a 70% stake. The company is listed on Bucharest Stock Exchange and GDRs are transacted on London Stock Exchange.

The company has a vast experience in the field of gas exploration and production and a history that began in 1909 with the discovery of the first commercial gas reservoir in the Transylvanian Basin by drilling well Sarmasel.

Starting with 2013, Romgaz extended its scope of work by taking over the Iernut thermoelectric power station, and thus it became also electric power supplier.

The company dwells on the implementation of the latest technology in geologic exploration, gas production and underground storage, financed from our own or external sources. The company economic and financial position is characterized by the profit constancy and solvency. Thus, Romgaz is one of the state-owned companies that have fulfilled all the conditions for economic rise, turning into one of the most important companies Romania.